Let's use a simple test as a baseline, which navigates to bing.com and verifies the text content of the Images link. The one demonstrated below is modified to look for 'ImagesModifiedToFail' instead of 'Images' so that it actually fails.

Execute the sample test and wait for the run to finish. The overall result of the test run is reported failed and the failing step is marked in the test. The Step Failure Details section, displayed under, provides an overview of the reason for the failure, the images, and suggestions what options you have to troubleshoot the error. 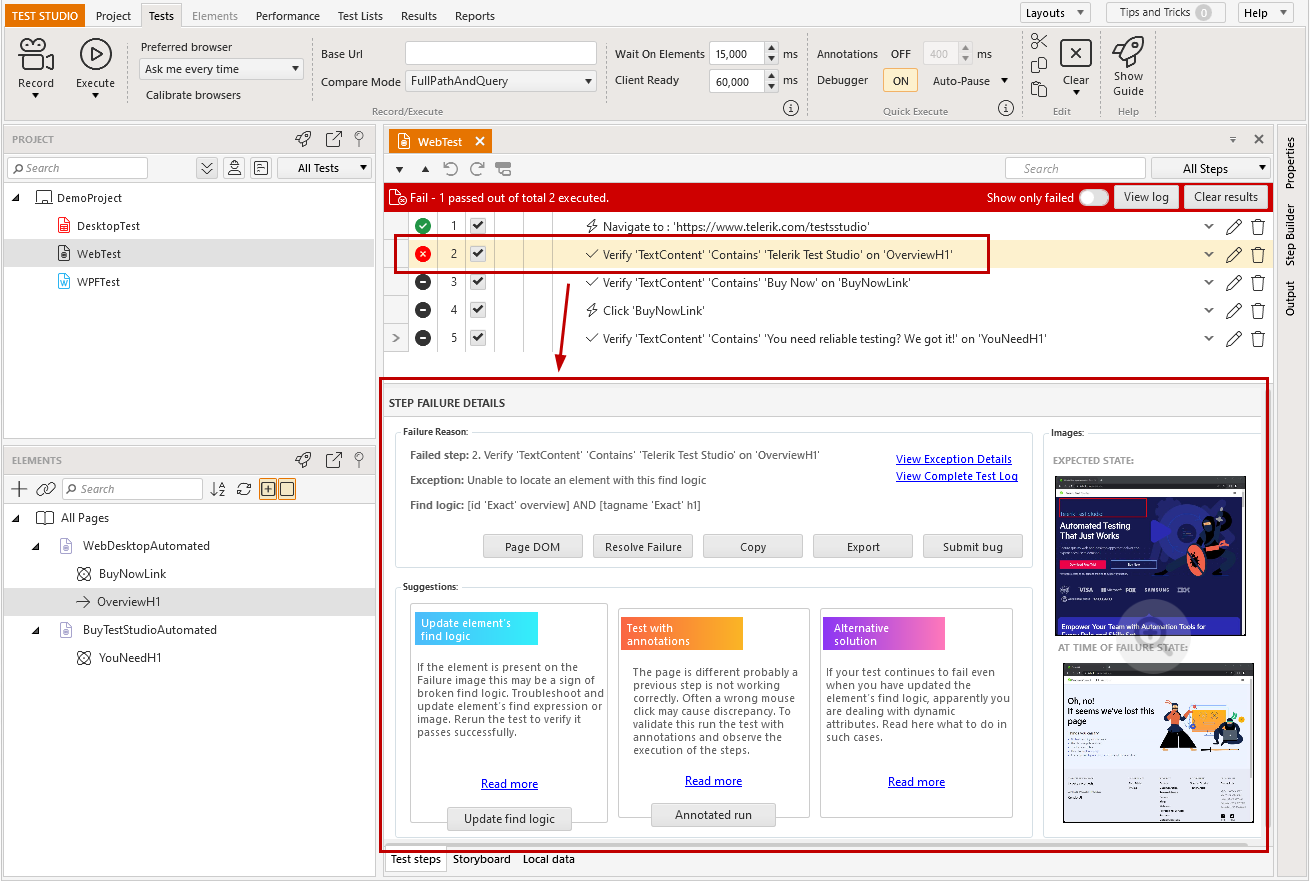 The Failure Reason section shows a summary of the error, which caused the failure. In it you have quick access to the following details: 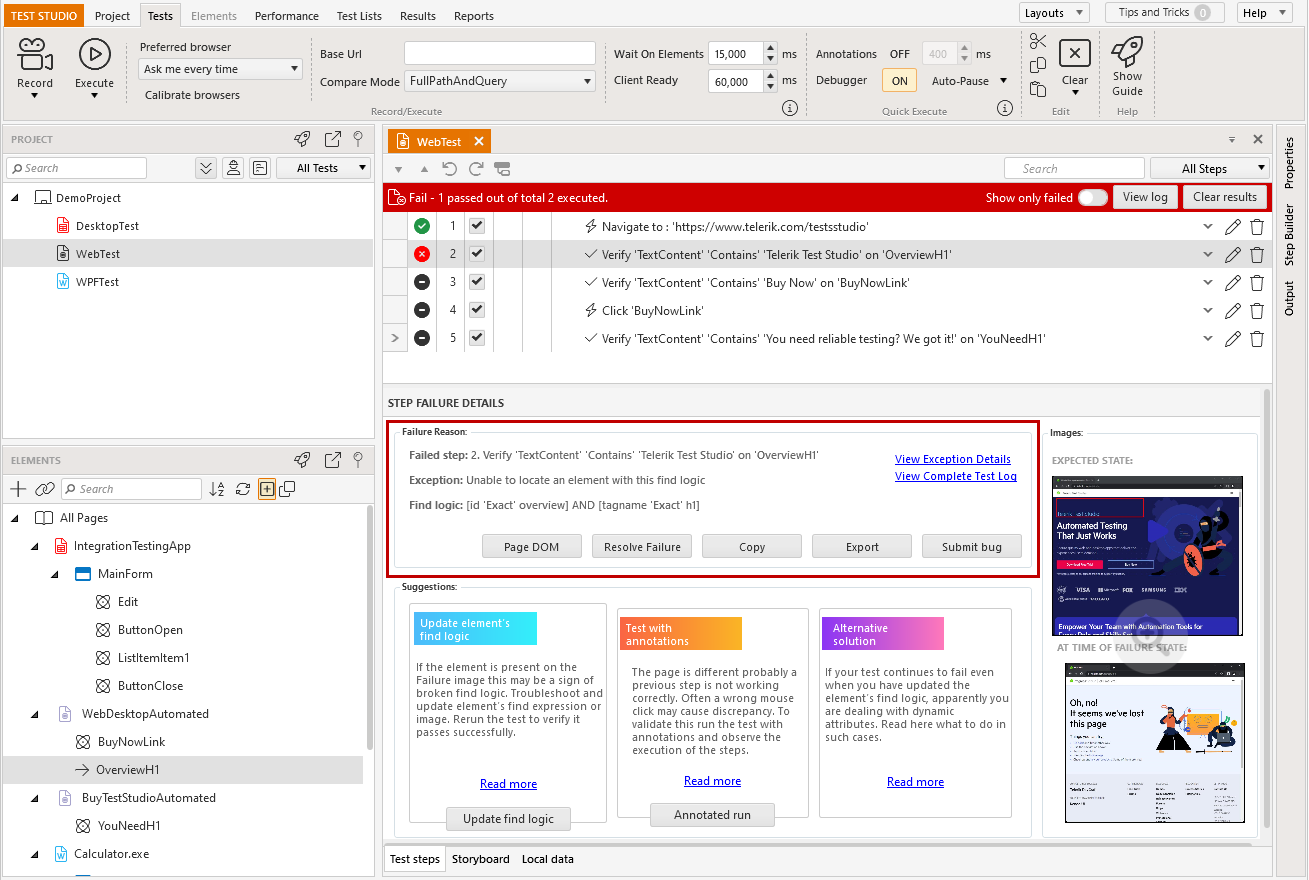 The Suggestion section hints you with handy features in Test Studio for troubleshooting a failing test and these are based on the specific error. Among these are 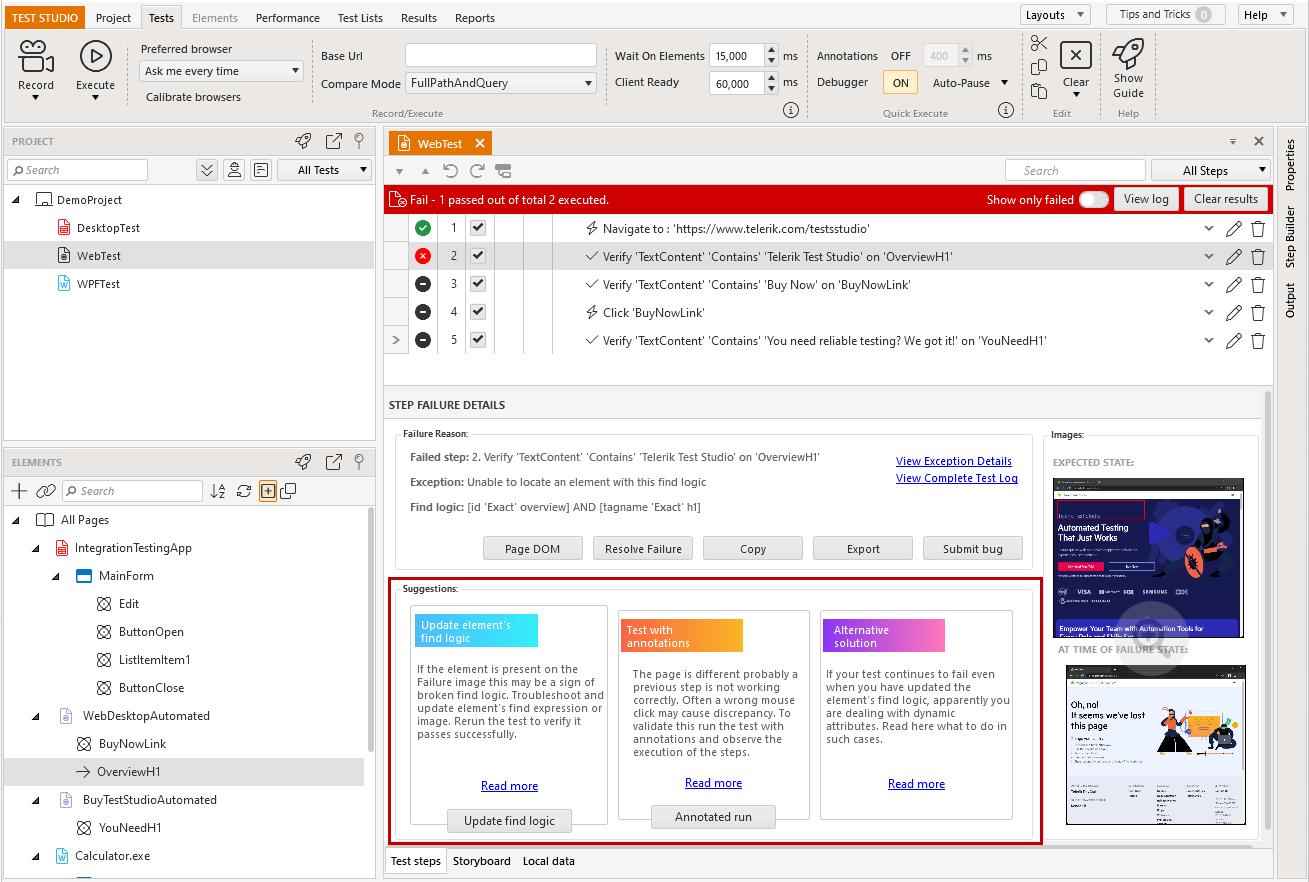 The Images section lists the state of the application at the time of failure compared to what was captured when the test steps were recorded. The images are often useful to identify that certain step gets executed before the application is in the correct state to accept the action. Such timing issues are usually resolved by adding wait steps or execution delays before the action is sent towards the page. 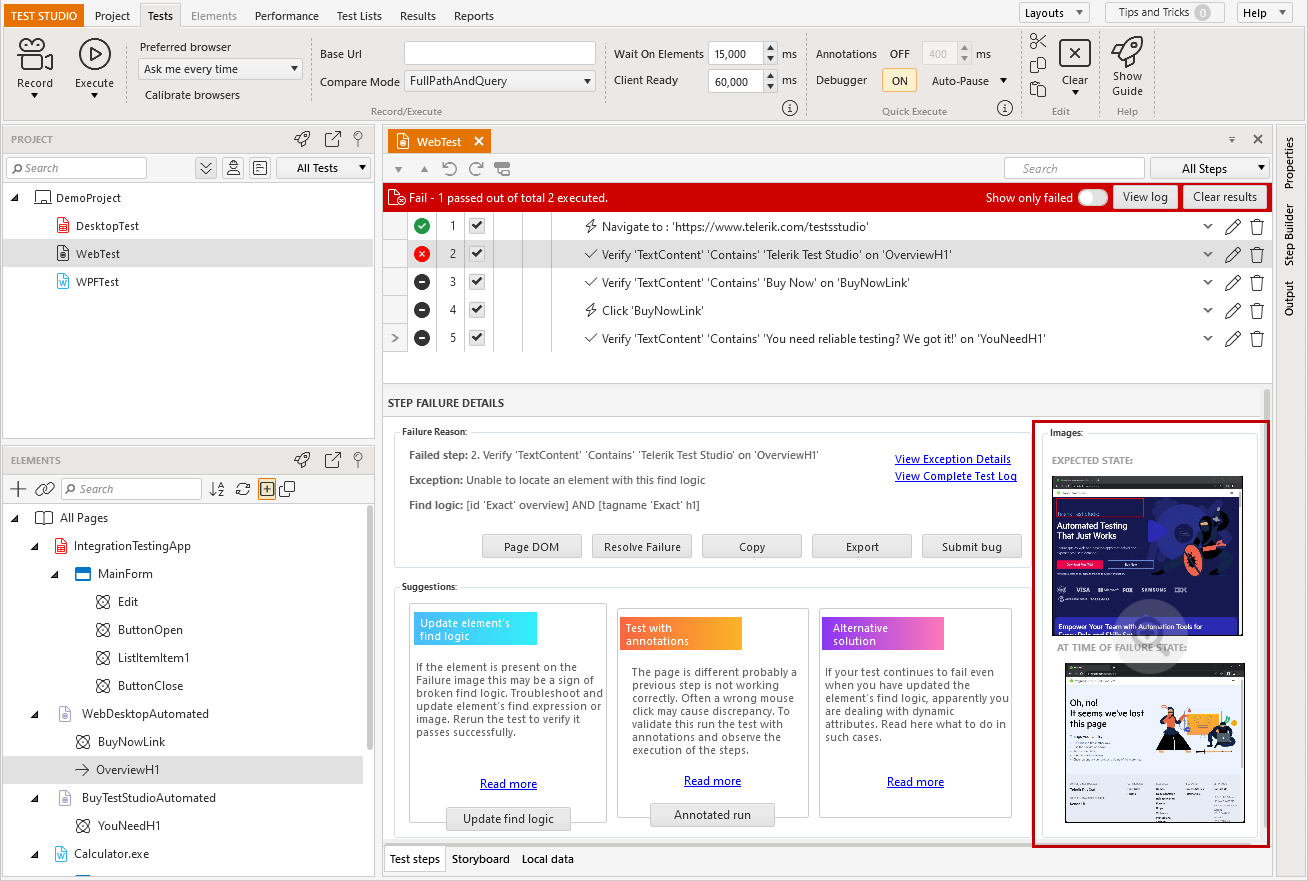 If you click the magnifier icon, the images are opened in full size and can be zoomed. 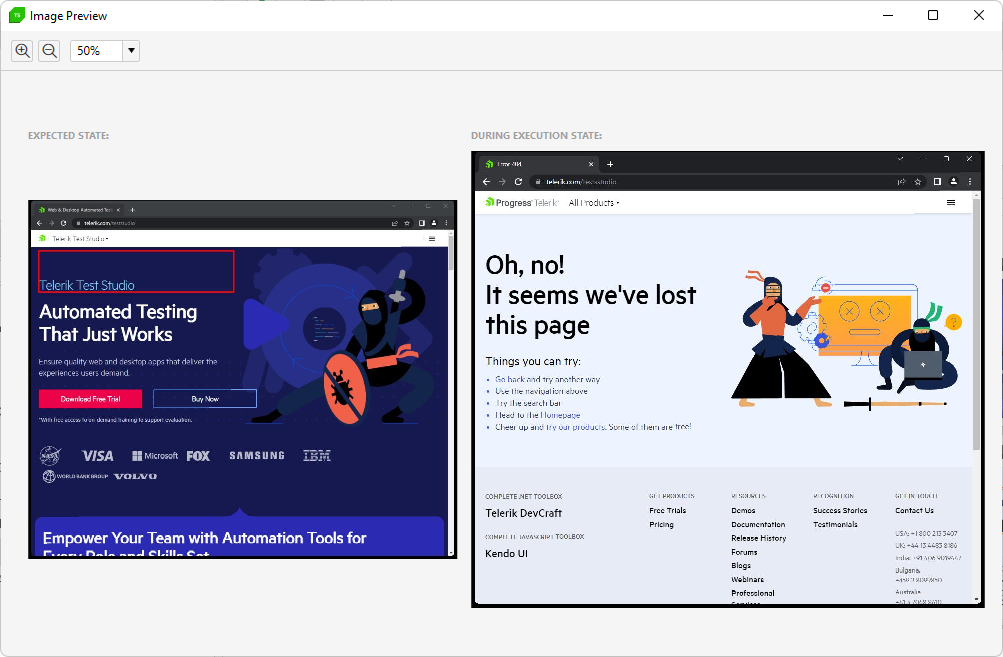 How to Open the Step Failure Details Window?

Execute the sample test and wait until it fails. Hover the mouse over the red cross next to the failed step - a Step Failure Summary will popup for a while. 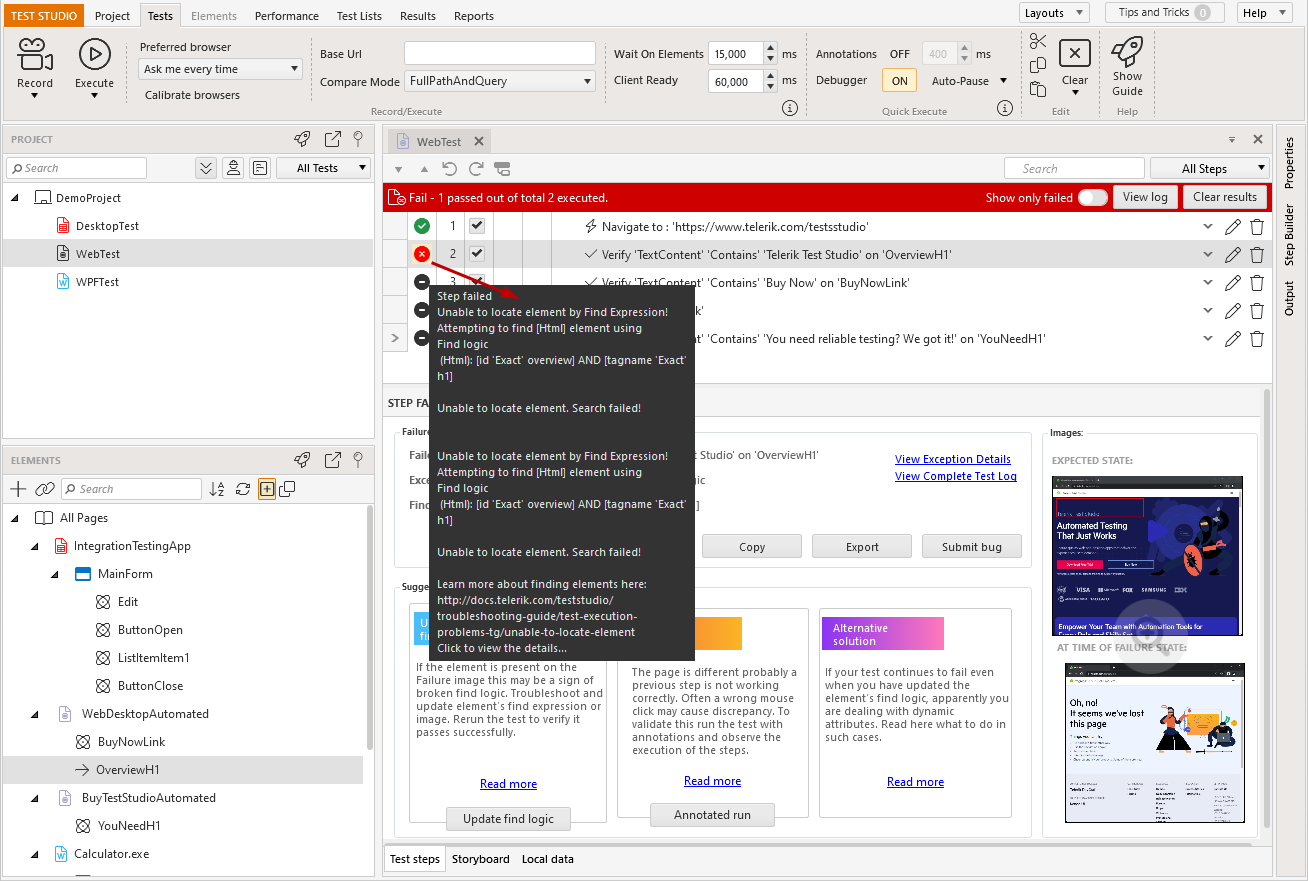 Click on the red cross to open the overall Step Failure Details with possible options to resolve the encountered error. 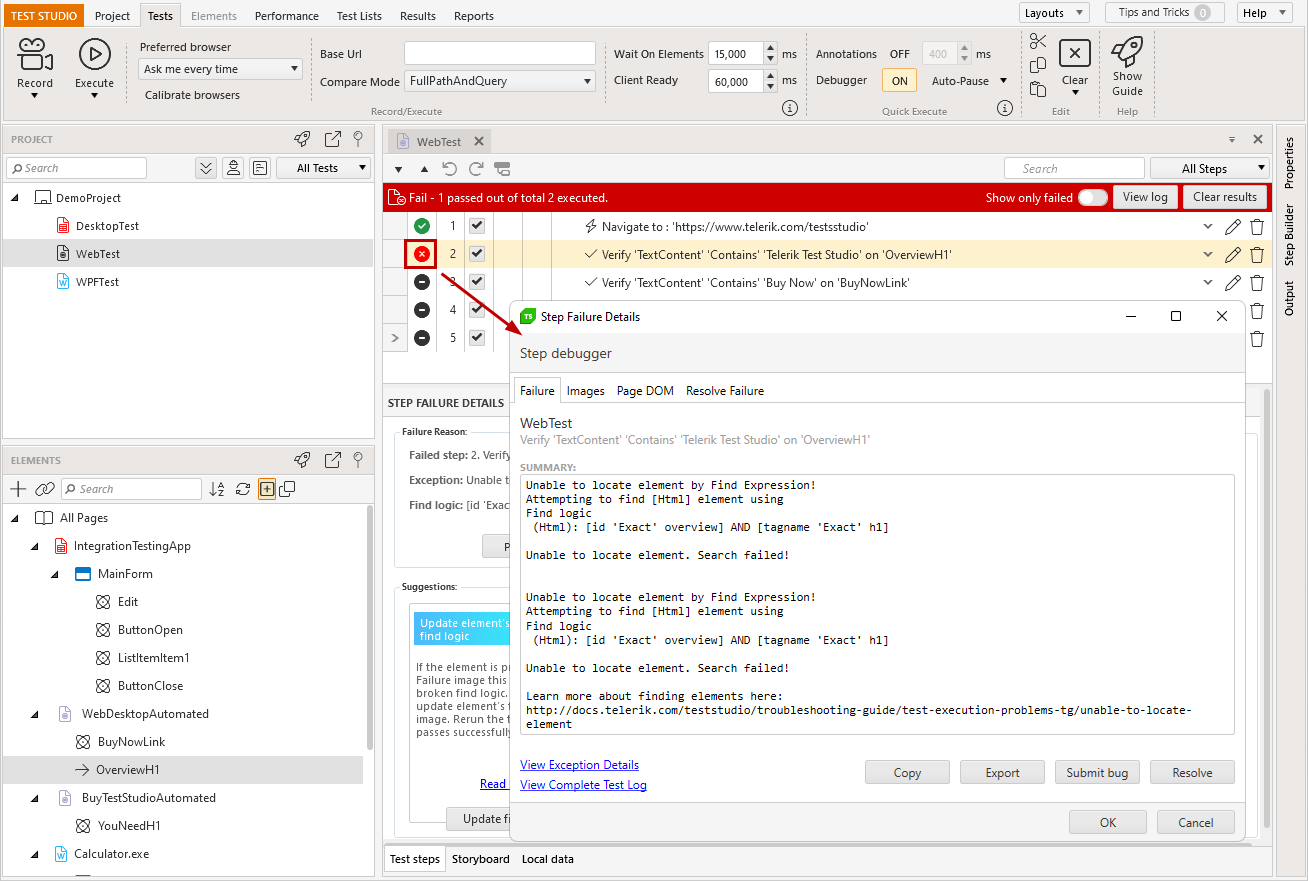 What to Look for in the Step Failure Details?

The failure dialog provides a variety of useful details, which can be used for the different failure scenarios, divided in few tabs. Let's have an overview for each of these tabs and how these can help us find the solution for the failing step.

The 'Failure' tab provides a summarized information for the encountered error - sometimes this can be quite descriptive, and other times it could be more generic. 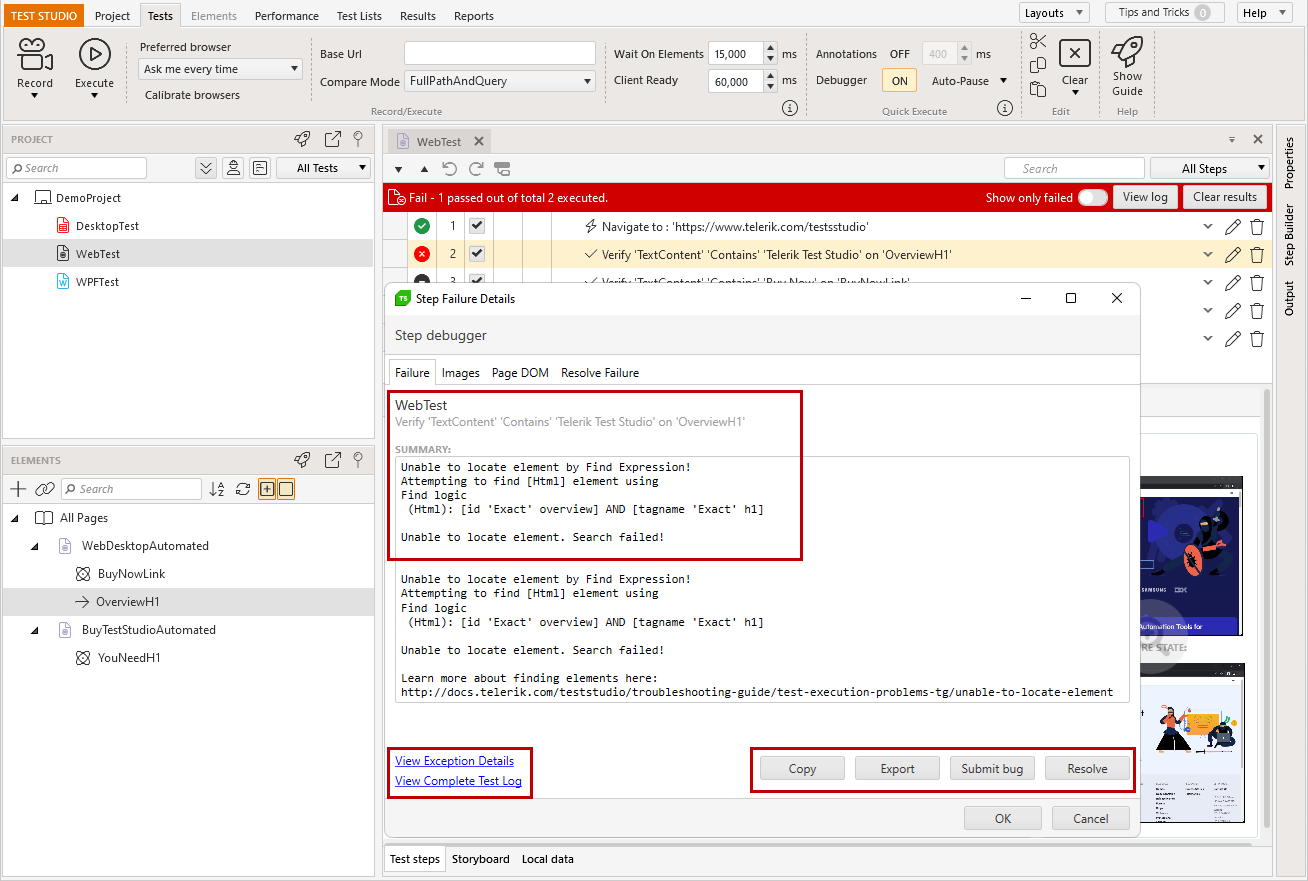 From this view you can also access other useful options: 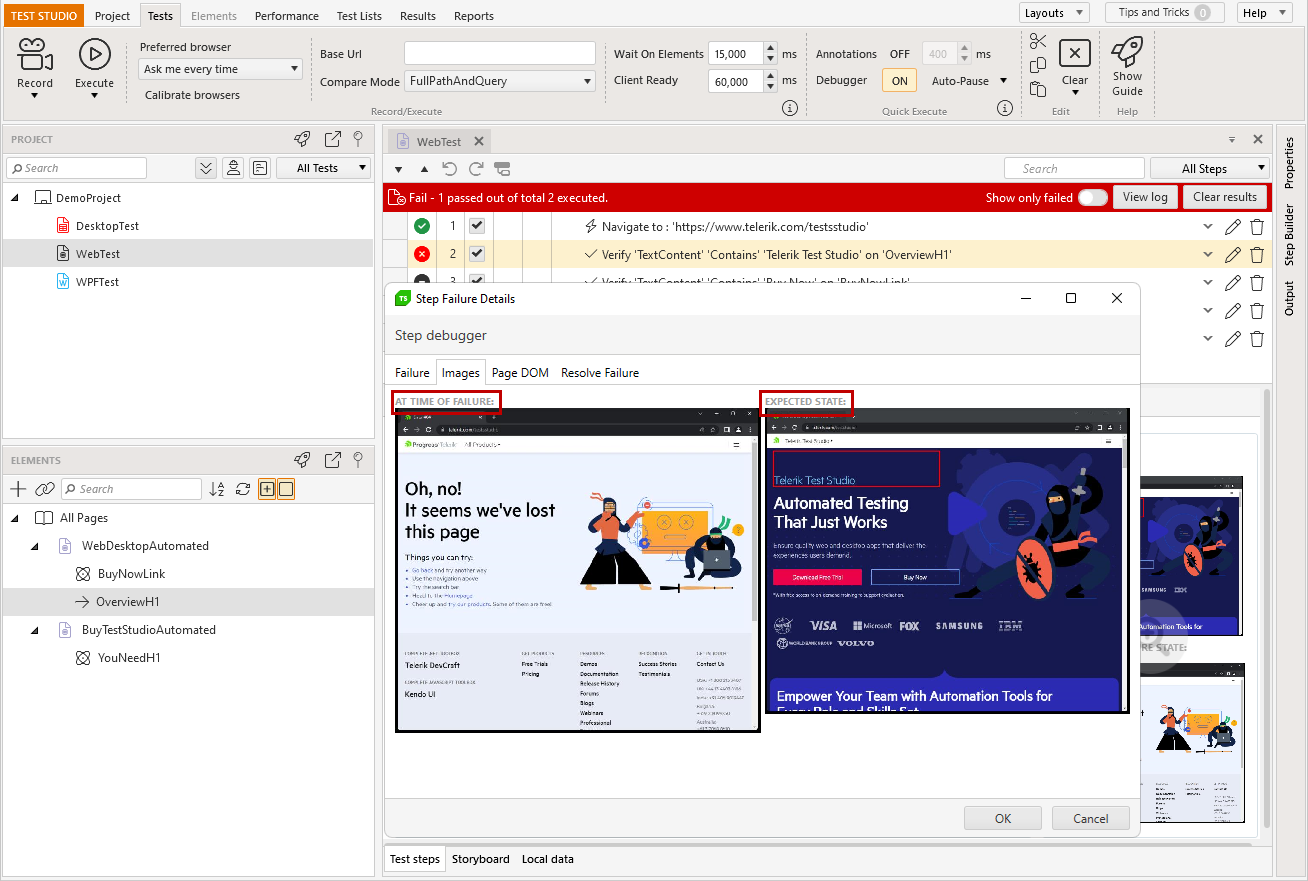 The 'Page DOM' tab displays a snapshot of the DOM state at the time of failure. You can use it to locate the element in the DOM tree and check its state, content, etc. 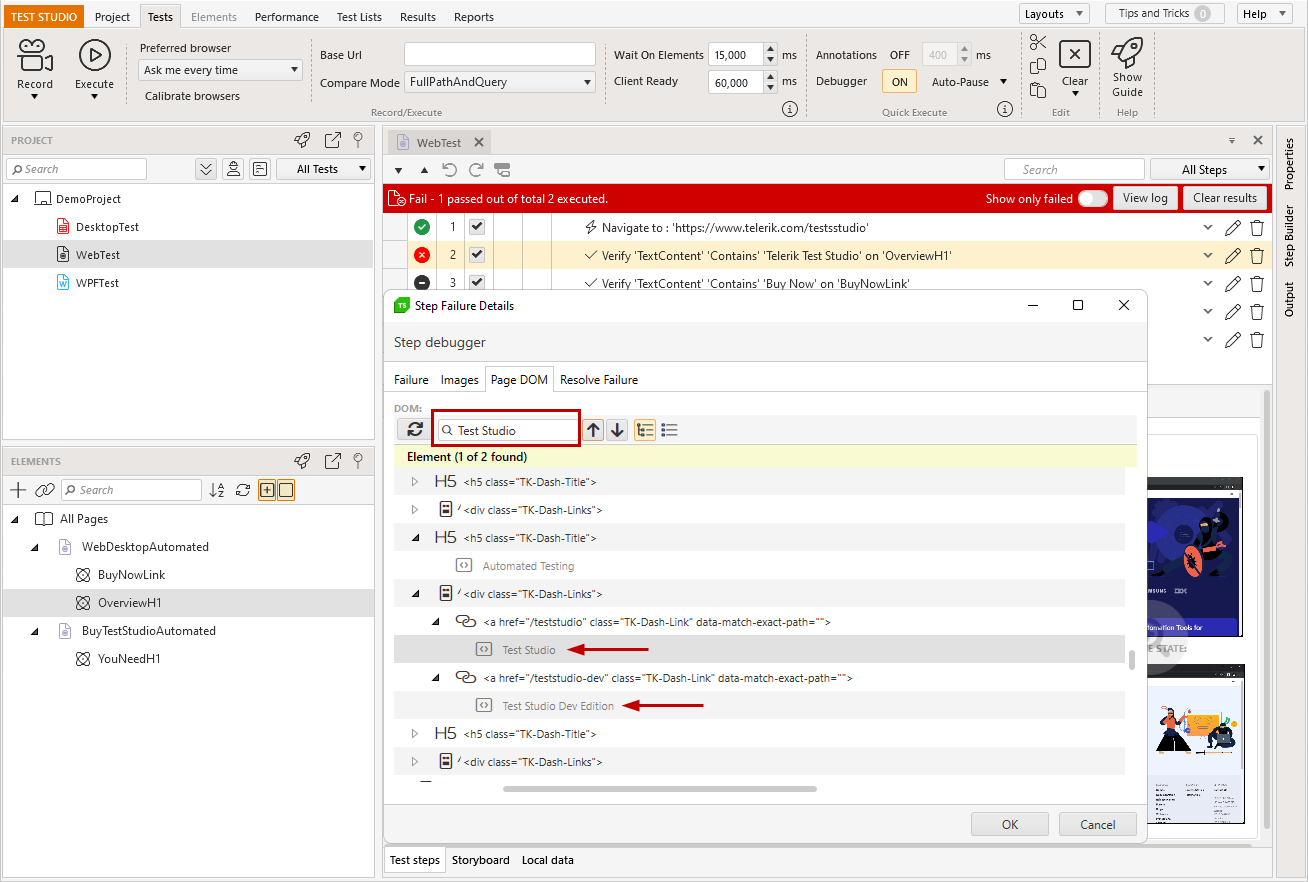 When to use the DOM on Failure?

The DOM on Failure is most helpful in situations where a test does not properly locate and act on a particular element. This includes any of the following, when unexpected:

What to look for in the DOM on Failure? 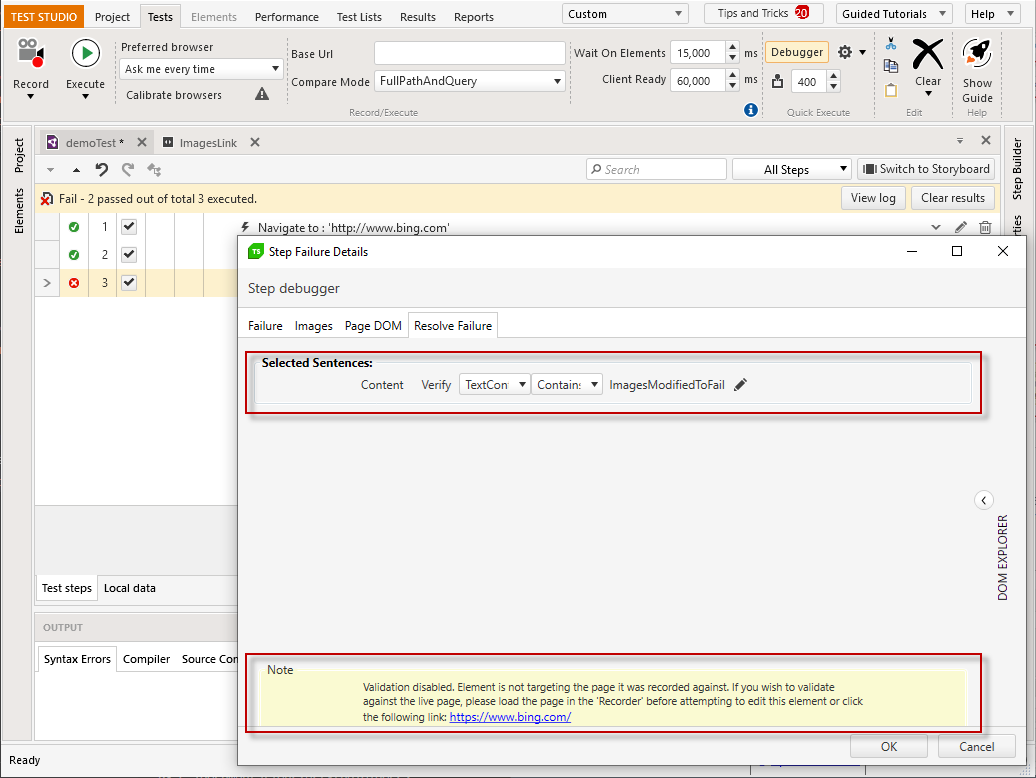 In case the failure is caused by an element, which cannot be located on the page, the 'Resolve Failure' tab provides different options to change the elements find expression. 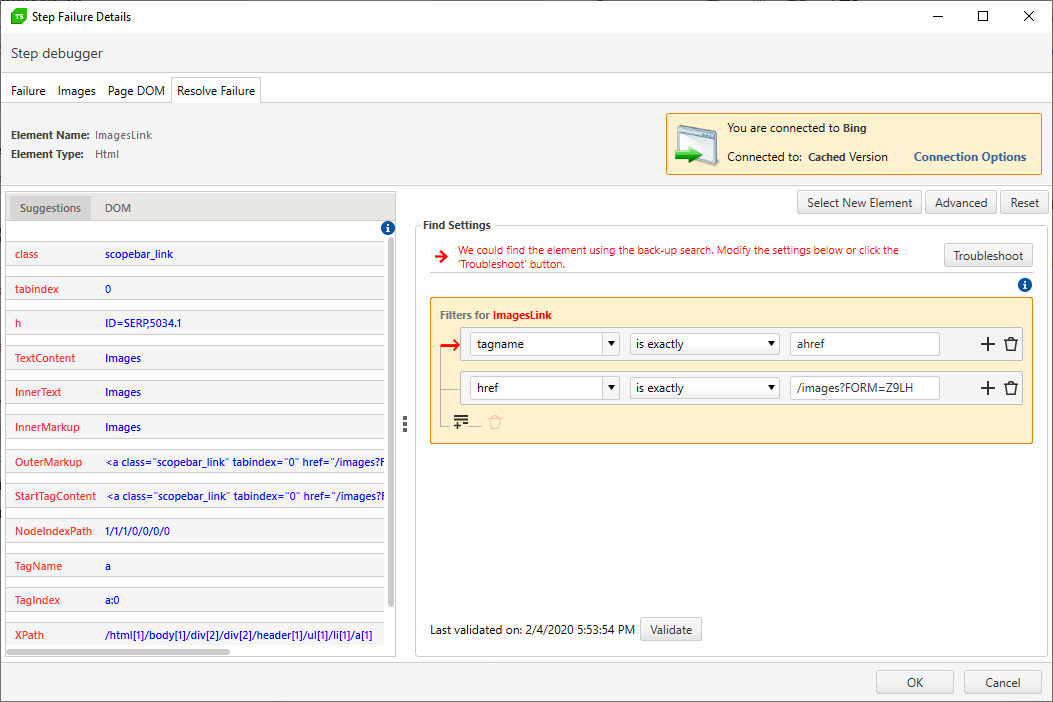 If the element was located on the page using the backup search recorded for it, you can directly choose the 'Troubleshoot' button. You can choose between the automatic update of search criteria used, or manually select a new element. 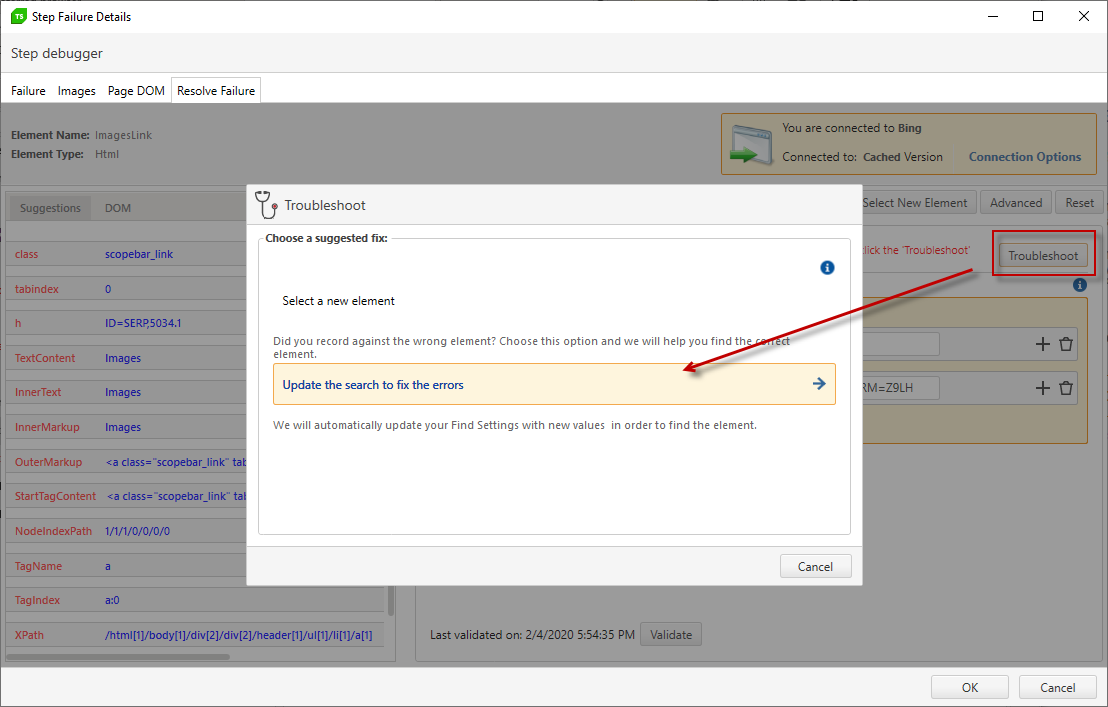 How to Export the Step Failure Details?

When a test is failing and you need to share the identified faulty behavior with a team mate, developer, or the Test Studio Support team, you can easily export the complete set of failure details into a single zipped file. The archive contains the failed step log, the complete test execution log, a screenshot of the web page and a snapshot of the DOM tree at the time of failure. To get the zipped file, click on the Export button on the Failure tab and choose a folder where to store it. 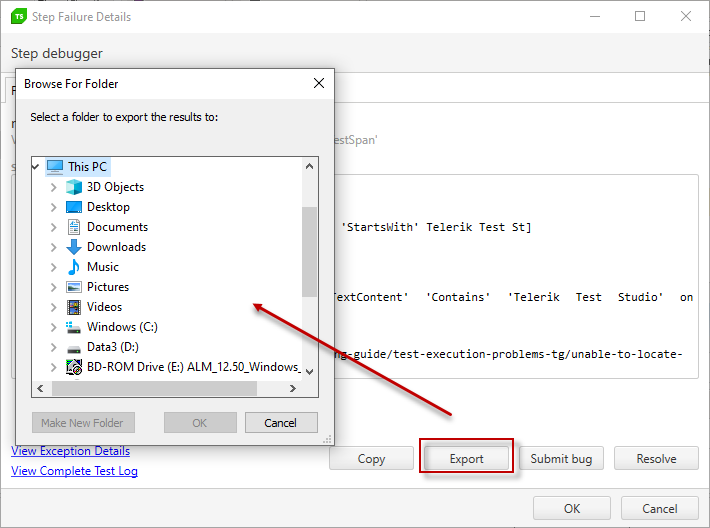