If you use the default settings to run Telerik tests as part of your TFS build, they will fail. This is because the TFS build agent runs as a service and services are not allowed desktop interaction as required by Telerik tests.

Getting the Build Agent to Successfully Run Telerik Tests

Your unit tests need access to the Visual Studio and ArtOfTest testing frameworks on the build agent machine.

In order for Telerik tests to successfully run they need to be able to interact with the desktop. In order for them to do that the build agent needs to be run in interactive (i.e. console) mode. Unfortunately the install of the build agent automatically installs the agent as a windows service and starts it. This is easily changed by following the procedure described at this MSDN article.

This prevents the agent from automatically running as a service and runs it from the command line instead. Be sure to leave the computer logged on and the TFSBuildService window open. Your build agent is running in that window. If you close that window or logoff the computer, the build agent will stop and you won't get any builds or unit tests run.

Most Telerik tests work just fine if you leave the computer locked (displaying the logon screen) so long as the build agent is running under a user account with desktop interaction privileges (which all regular users have). The only tests that may have a problem with this are those that interact directly with the desktop (Mouse.Click, Window.GetBitmap, etc.). Tests that exclusively interact directly with the Browsers DOM will run just fine this way. Unfortunately there's no way around this. This is simply the way that Windows works.

In order for Telerik tests that interact directly with the desktop to work you'll need to leave your TFS build agent machine logged on and displaying the desktop all the time. This means you'll have to disable the screensaver and never lock the computer. Yes, this presents a security risk to your company. If you can lock this computer up into a secure room (such as a datacenter), you can minimize this security risk.

Specifying Which Tests to Run 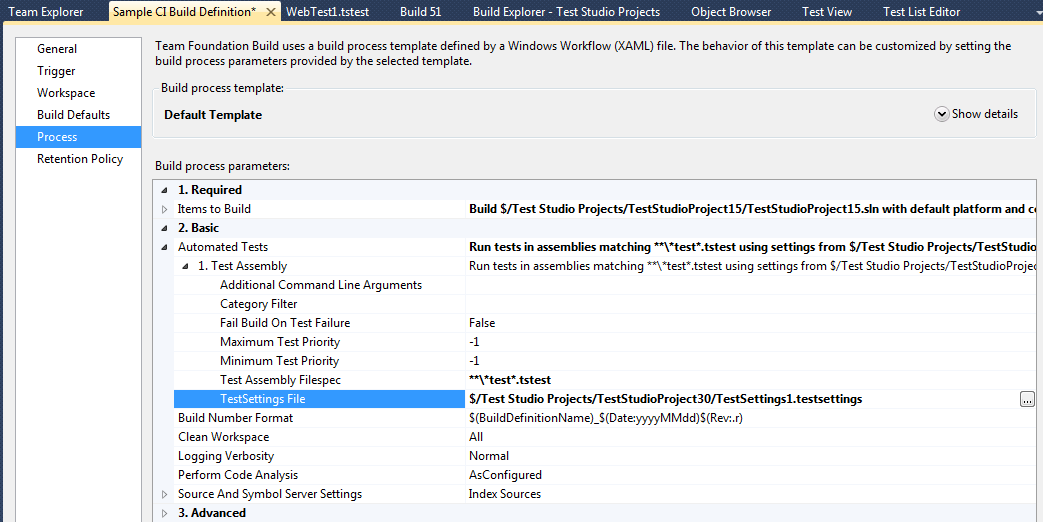 You can set the Test Assembly Filespec to "*\.aii" This causes the build to run all of your Test Studio tests using the same .testsettings file. Additional configuration settings may be necessary for Silverlight testing in builds.

As part of the TFS build definition you have the option of specifying which test list(s) to execute during the testing phase of the build. If you want to modify this list, or specify specific tests by name you'll have to manually modify the TFSBuild.proj file yourself. Unfortunately (as of Visual Studio 2008 and TFS 2008) there is no GUI allowing you to modify/update the list of tests to run once created.

As part of your project development and testing you may find the need to add a new test list or change the name of an existing one. If this happens (and you want the change to be part of the automated build) you'll have to manually modify the TFSBuild.proj file for your project. Follow these steps:

As part of your project development and testing you may find the need to add a new test or change the name of an existing one. If this happens (and you want the change to be part of the automated build rather than adding or modifying the test list) you'll have to manually modify the TFSBuild.proj file for your project. Follow these steps:

## How to Run Tests in a Build Without Test Metadata Files and Test Lists (.vsmdi Files)

Normally when you create a new test project, a metadata file is automatically created and added to the project. If you don't want to use this metadata file to create test lists there's a good blog post on how to do that here.