The prerequisites from Test Studio and Docker side are listed below. Make sure that you comply with them, before proceeding with the next steps.

Executing tests in a Docker container has its specifics and limitations. It is better to know about them before you proceed.

You can refer to the Docker documentation for commands and questions related with that software.

Below are listed the steps to setup a Docker container for testing. 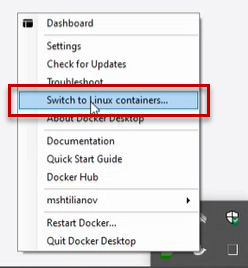 2.  Pull the official Microsoft Windows Docker image from the Docker Hub. Use the command that is provided in the Docker Hub and make sure to specify the exact build to be pulled.

The build version of the Windows image to install in the Docker container must match the Windows build on the current host machine.

The Microsoft Windows Docker image does not support "latest" tag. For further information check the documentation on the DockerHub's page for this image.

3.  Create a container from the official Microsoft Windows image. To do that, go to Images in the Docker desktop application and click on the Run button.

Then, expand the Optional Settings and specify Host Path and Container Path. The Host Path is a folder on the machine, which is available to the Docker container and the Container Path is how you will reference this resources from the Host Path within the container. 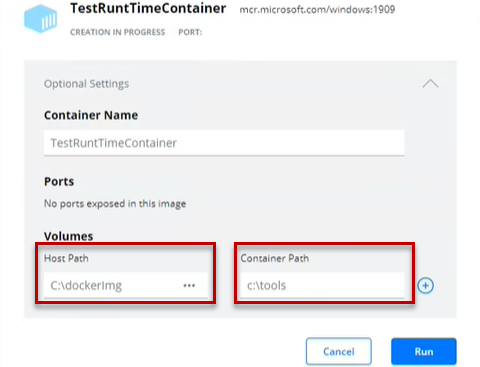 Install both Test Studio Run-Time and Chrome browser enterprise edition in passive mode, because there is no UI in the container and active installation can not complete. You can use the following command, but make sure that each installer is finished without errors before you proceed with the next one.

Additional information about the msi installers can be found on the Microsoft documentation.

Tests and test lists execution in the Docker container is only supported for Chrome Headless mode.

After completing the above steps in this article, you need to copy the project, from which you want to execute tests and test lists, to be available in the Docker container. Place the project folder in the Host Path folder on your local machine and they also show up in the Container Path folder.

Open the container's Command Line Interface (CLI) and use the ArtOfTest.Runner.exe to start the execution. This test runner provide multiple options for execution and output, which are all explained in the linked documentation. The below example command triggers a test list execution.