The latest release of Test Studio introduces a new, more robust approach for storing results of remotely executed test lists. MongoDB is a non-relational, document database designed for ease of development, availability and scale (click here for more info). It presents objects inside Test Studio as collections of documents of specific type, stored on disk. Each document is stored as a binary type-rich format of json - BSON.

MongoDB has its own specification for storing and retrieving files, which exceed the BSON limitation of 16MB. It’s called GridFS. Instead of storing a file in a single document, it divides a file into parts, or chunks, and stores each of those chunks as a regular MongoDB document. A Test Studio document in the context of MongoDB data storage contains three components – _id, Metadata and Data. The _id field is a MongoDB-generated value which is indexed by the MongoDB engine for fast read access. The Metadata object has some document descriptive field, such as LastUpdate time, Schema, Deleted, etc. The Data object contains the actual data that describes the corresponding Test Studio object.

Test Studio keeps its objects in the following collections – projects, testlists, tests, testlistresults, results and GridFS (files and chunks). The Data object of each document contains the Test Studio Id of the respective object, represented as a GUID string. 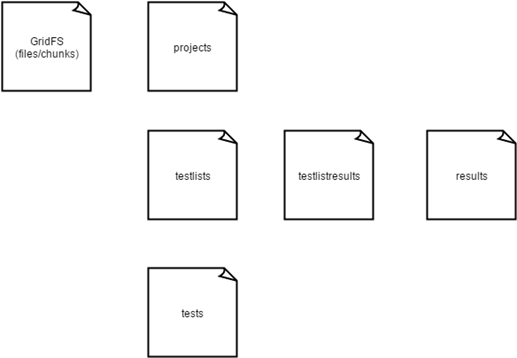 There are various tools for browsing and manipulating the data inside a MongoDB database. The mongo shell (

One way to dig into the Test Studio database, once some data has been aggregated as a result of remote TestList runs is to use the find() command in the interactive shell.

This will return a collection of ALL testlistresults documents for the given Project.

This way you’ll get all results documents for the selected TestList.