The TFS integration also facilitates the work of a QA team on the same test project, allowing them to check-in their results at the same time and independently. In addition to TFS support, Test Studio can also interact with any other file-based source control system.

If you attempt to integrate with TFS in Test Studio Standalone version and do not have Visual Studio installed, you will receive the following error: Unable to load source control plugin. 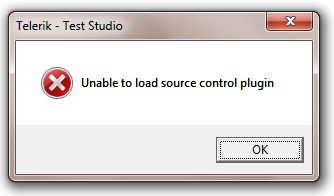 You will need to install Team Explorer. This is the client SKU that allows you to access the TFS functionality.

If you are using the Test Studio VS plugin, be aware that Visual Studio has built-in TFS integration.