How to Run Tests in Parallel / in Multi Browsers

Customers often wonder "How can I run my tests in parallel" and/or "How do I run my tests in multiple browsers, including multiple versions of the same browser". There are many ways to accomplish this. This article will focus on how to achieve this using the Scheduling Server and Execution Server that comes with both full Test Studio and our Runtime edition.

No matter which approach you try to take, there are some restrictions to running tests in parallel that must be honored:

You now may be wondering "With the above restrictions how is it possible to run tests in parallel"? The answer is it can be done, but it requires multiple machines. Each machine can be running a different test simultaneously. It is very common to use a set of virtual machines (VM's) for running your tests. You will need one machine for each unique version of a browser you want to run your test in. The good news is that you can have multiple browsers installed on the same machine and run your tests against different browsers on that machine.

How to Run Tests in Multiple Browsers

Now let's get into the technical details of how to make your tests run in different browsers. First you must put your test or tests into a test list. Next open the Test List Settings, go to the Web tab and open the ExecutingBrowsers drop down. 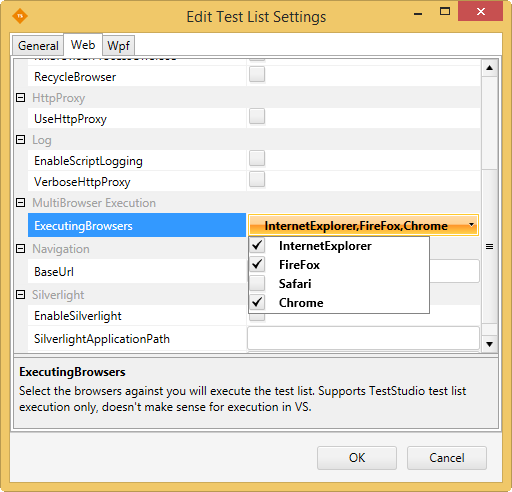 Here is where you select which browser or browsers you want Test Studio to run that test list in. The default will run the test list in IE only. In this screen shot I've selected IE and Firefox and Chrome. At run time Test Studio will run the full test list from start to finish in IE, then it will run it again in Firefox and last it will run it again in Chrome. When finished you will see three different result sets in the Results view, one result set for each browser the test was executed in.

That's all it takes to make your tests run in different browsers on the same machine.

How to Run Tests in Parallel

As previously stated in this article, to run tests in parallel you must setup multiple execution servers. Here's a high level block diagram of what this looks like: 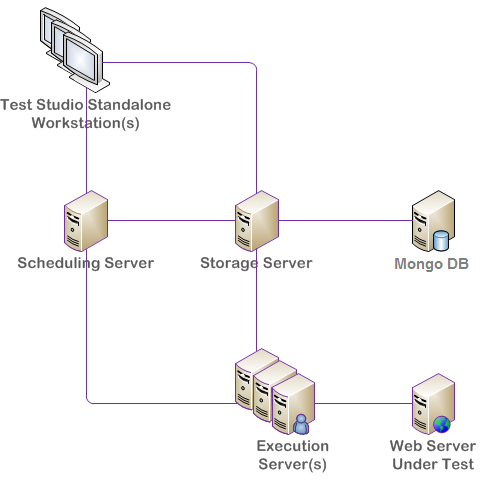 You can have as many Execution Servers setup and controlled by one Scheduling Server as you want. Of course each Execution Server requires that Test Studio is installed on it (one license per machine). We recommend installing our Runtime edition. It was specifically made for supporting this environment (and the cost for a Runtime license is a lot less than the cost for full Test Studio).

Once you have your scheduling and execution environment setup, you go to the Test List tab in Test Studio and select either Run List Remotely or Schedule Test List. In both cases you will be presented with a list of execution servers to run the test list on and an option "Distribute test among these machines".

First select which machines you want your tests executed on. You can select as many or as few as you like. Here's what "Distribute test among these machines" does:

That's what it takes to get tests running in parallel using our Scheduling and Execution servers. As briefly mentioned above, there are other methods, but they all involve putting together your own home grown scheduling environment. Maybe you want to write your own specialized scheduling server that better fits the needs of your organization. Or maybe you'd prefer to use Microsoft Test Manager. This document will not explore those options. You may contact Test Studio technical support of you want to pursue other options.