I have multiple test environments against which to execute my test scripts. The server URL is different for each environment. How can I avoid rewriting all of my tests from scratch to make them work with a different server URL?

Test Studio allows you to create URL-relative tests with the concept of BaseURL. The BaseURL property is the static part of the URL that is set as a global setting for your entire project. A simple example is if your application MyApplication is deployed on both a production server http://Server1 and a testing server http://Server2. If you set the global project setting and start recording, the navigation step will be recorded as follows:

In addition test lists have their own BaseURL property. This property is by default inherited by the project settings, but you can change it to run the same set of tests against different servers. Bear in mind that if a test list has a BaseURL set it overrides the project property.

By default the test list, created in the project with already set BaseURL, inherits the same BaseURL. This can be changed in the test list settings. The BaseURL setting is listed under the Web tab. 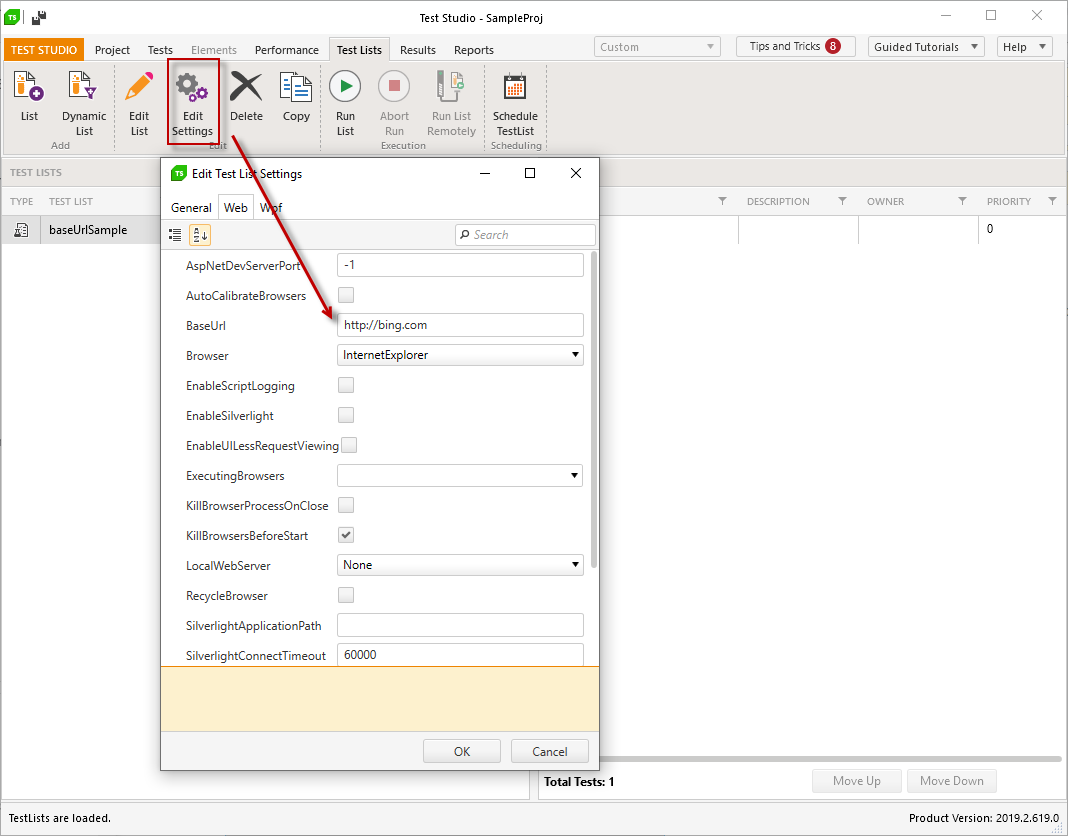 Note! The test list setting overrides the project setting, and thus you can create multiple test lists and set each to run against different BaseURL.

When the test uses any URL, which matches the BaseURL set for the project, the Navigate step will be recorded with the URL divided accordingly in the BaseURL and NavigateURL - this matches the relative part of the used URL. 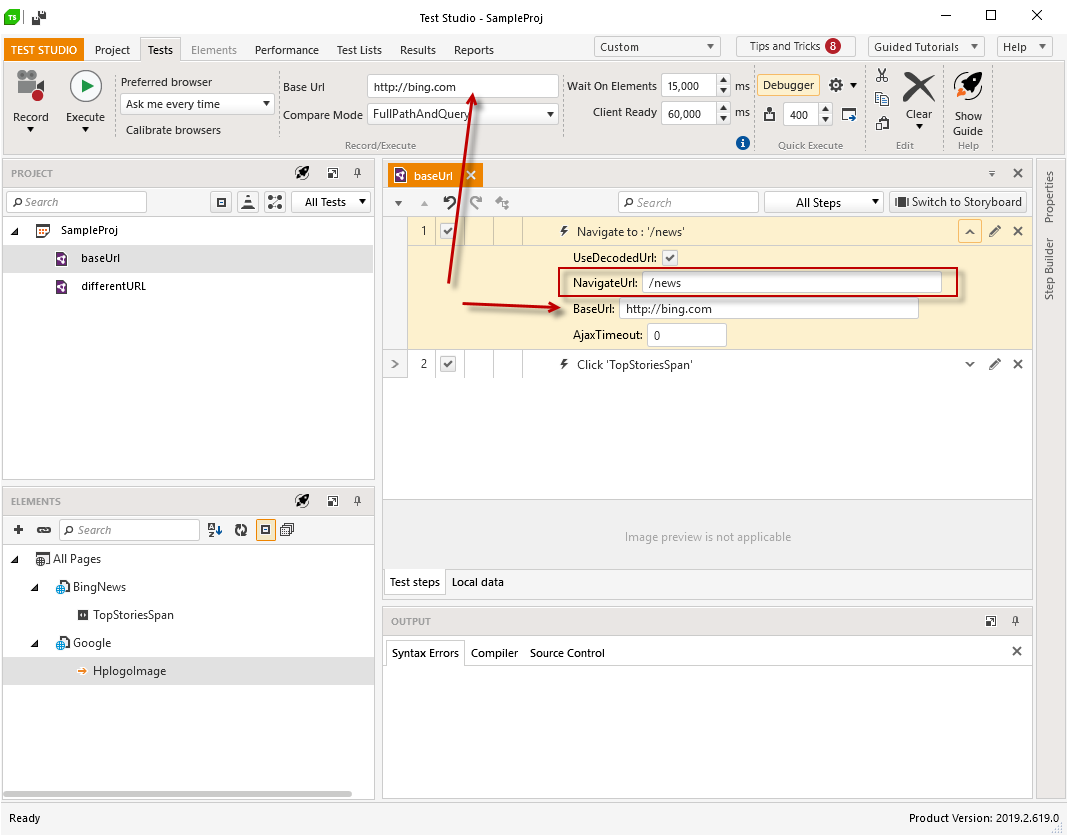 If the navigated URL differs from the project BaseURL the navigation step is recorded as if no additional settings are changed. 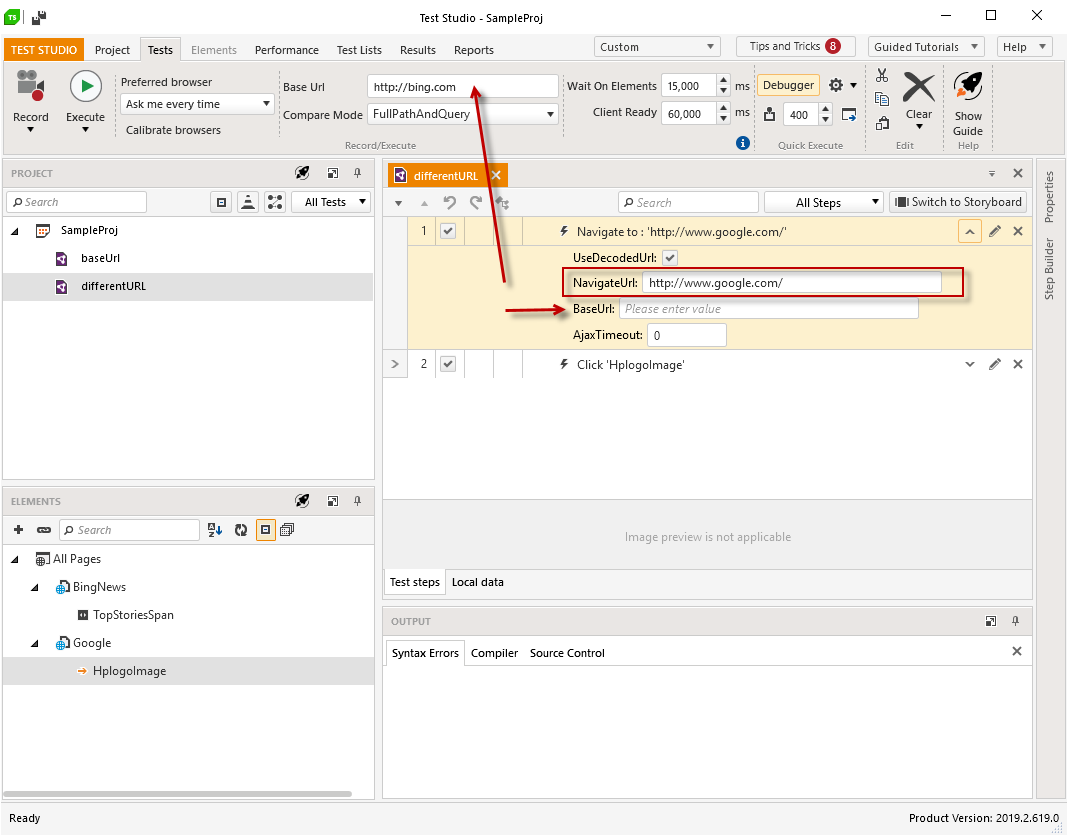 Note! The Navigate step overrides both the project and the test list BaseURL setting. Thus, if you need a single test to use different URL, adjust its Navigate step to use that desired URL.

Using the BaseURL with Frames

When a recorded test step interacts with an element inside an iFrame, by default that iFrame is mapped with its full URL. There is an option, however, to specify that the URL of the iFrame is relative to the set BaseURL. Highlight the Frame node in the Elements Explorer and locate the UsesBaseUrlHost setting in the Frame's Properties Pane.

Let's say we want to run a test against the same application, but on different servers: http://Server1/myApp and http://Server2/myApp. Also say there's an iFrame in the app with the following source: http://Server1/myApp/frame1.aspx. Simply set the frame's UsesBaseUrlHost property to True. When you switch the BaseURL before executing the test, Test Studio will automatically swap the BaseURL portion for the frame under the hood. 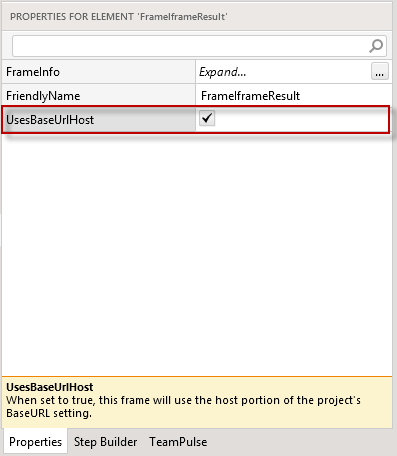 When UsesBaseUrlHost is set to True, the frame uses the host portion of the project's or test list's BaseURL setting. 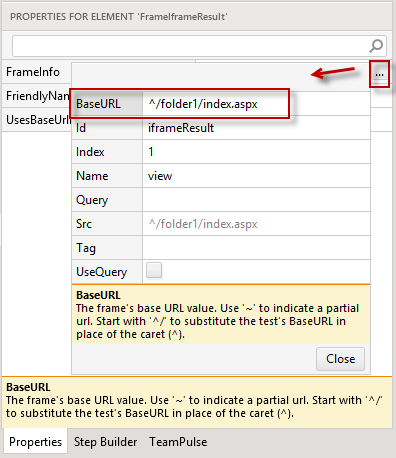 If the base URL of the dialog matches the one set as a BaseUrl property - Test Studio will automatically split the recorded URL, as well. For example - PopupUrl property of the "Connect to pop-up window" test step will contain the second part of the dialog's URL. 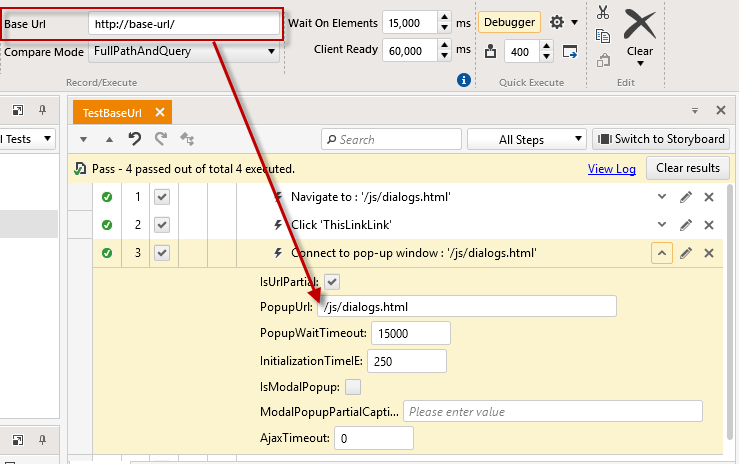 If you decide to apply the BaseURL setting for the project when there are already existing tests and elements, you may need to refactor the elements in the Elements Repository to adjust the Page nodes properties to reflect the BaseURL recording options.