Test Studio for APIs introduces Variables as a new concept in the Test Studio product family. The Variables are named values that can be persisted in the project files (Design-time Variables) or dynamically created by Test Steps during their execution (Runtime Variables).

A Project-level Variable will not be accessible to Tests that define a Test-level variable with the same name. All Steps in a Test have access to the same Variables.

To share a Test-level Variable with other Tests, use a Set Variable Step and choose Level = Project.

The syntax for referencing a Variable Value is:

The Value of a Variable can contain references to other Variables, for example variable named "base-url" could have a value like: 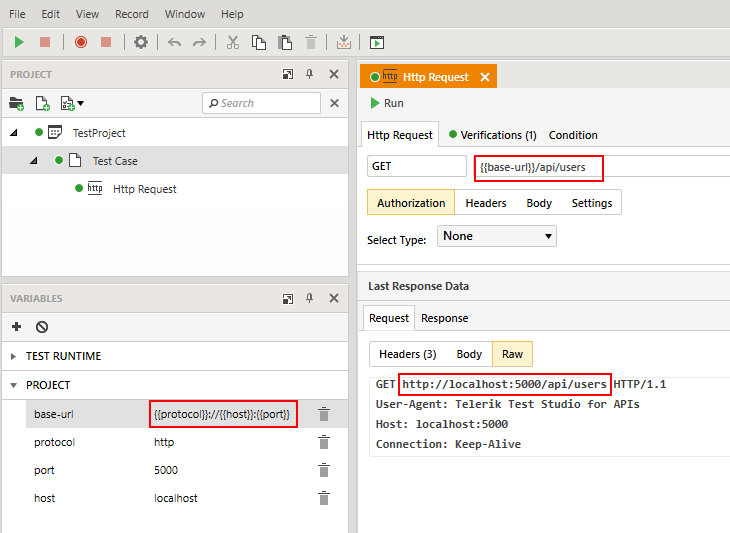 The Runtime will replace the references with the corresponding values when executing the Project.

Many Test Step properties allow variable references, for example you could use Variables in the HTTP Request Step's Method, Url, Body and Headers (both in Name and Value) properties.

In summary - the following precedence is used:

The Runtime Variables are visible (read-only) in the Variables Pane after execution.

Test Studio for APIs stores Runtime Variables in a temporary folder named ".variables" in the root of the test project. Files in the ".variables" folder are related to the last test run and are overwritten on every execution so it is not recommended to include them in your source control.

Every time the a project is closed, all files in the ".variables" folder are deleted.

If you need to clear all Runtime Variables without closing the project (for example if you are debugging your tests and need to execute a single test case or step, without having any left-over runtime variables), you can use the "Clear All Runtime Variables" button in the Variables pane. 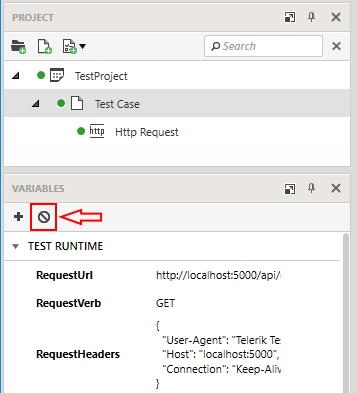 The Project Variables whose Values are overridden by Test Variables will appear with strikethrough effect. 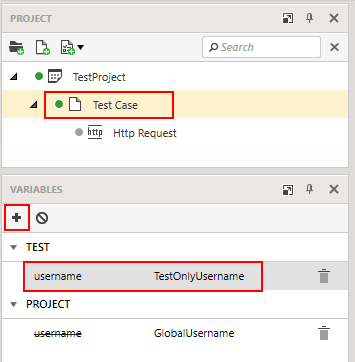 Conditions cannot access variables that are created by the step during runtime because the condition is executed prior to the step. Verifications on the other hand have access to those variables.

Use Cases for Variables

Variables from the CLI arguments: