Burndown is a graphical chart showing the progress of completing work over time. It also shows a forecast of when the estimated work will be completed. It`s calculated based on the amount of work done up till this moment. You can read more about burndown charts and their usage (wikipedia).

Here is an example:

As a graphical representation of work remaining over time, the burndowns in TeamPulse show the rate that work is being completed in an iteration. There are two lines on the graph which show the actual work completed and a forecast. The actual trend is used to calculate the information shown in the Estimated Completion and Late Items columns in the “Iteration Status” report.
There are additional options at the top of the chart: Actual, Forecast, Added/Removed, Done. By default they are all visible. Clicking on them shows/hides the corresponding information from the chart.

Choosing which type of burndown you'll use depends on how much data you'll track inside TeamPulse. Many teams will only need to track story level progress. Others will need the early feedback of the work completed burndown but also will need to track more data in TeamPulse for it to work. There are 4 types in TeamPulse:

For example a task may be estimated to 5 hours but all of a sudden, it becomes clear that the time necessary to complete it may be 9 hours. So instead of changing the original estimate, it is better to update the work remaining field, so that the managers get a full understanding of the project health.

Where do I look for the burndown?

If you are looking for a burndown for the current iteration: 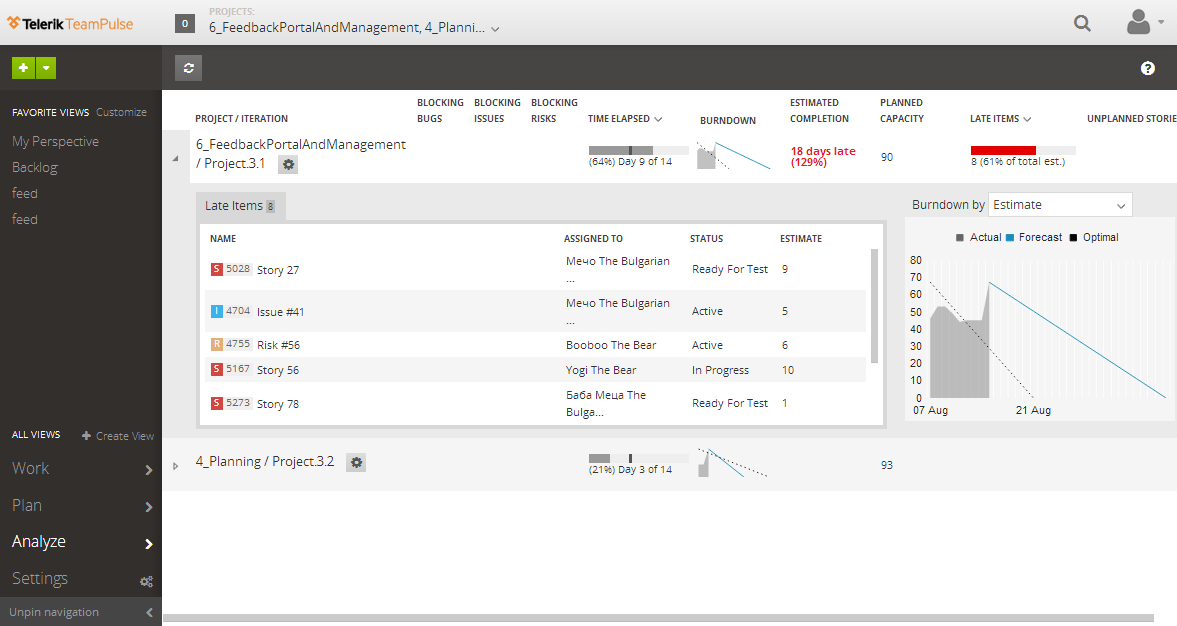 If you want to see the burndown for past iteration(s):

When do I need to check my burndown?

In the beginning of the iteration it won't be useful as you are just starting your work there is no enough data to generate a meaningful burndown. Later in the iteration you will start to see the actual trend and the prediction of when all the work will be finished.

So it is most useful to look at the burndown in the middle of the iteration when you've already done some work but still have to adapt if the predictions for the iteration are not good.

Looking at the burndown at the end or after the end of the iteration can help you analyze how work is spread over the iteration. The ideal option is for the work to be spread evenly throughout the iteration without the stress of "OMG! The iteration is ending we need to work overtime to do everything on time".

What is velocity? How do I track my team's velocity?

Velocity is the average measure of how much you've completed for a given iteration.

For example, if in an iteration you've completed estimated work of 80 your velocity for that iteration is 80.

The velocity gets useful when you track it over the course of several iterations. Then you can compute what is your average velocity. This will help you when you are planning your next iterations.

For example, if your last 3 iterations had velocities of 50, 30 and 40 your average velocity will be 40. So when you plan your 4th iteration you'll know to plan work only estimated as totally 40. (in this example you were overly optimistic in the first iteration getting too much work, then in the second - too pessimistic and got way less work and on the third iteration - you were ok.)

You can see your teams velocity for a project:

Do we plan properly? Are we too optimistic? Do we deliver what we've intended during the planning?

(Go to Analyze > Reports > Planning Report Types > Velocity)
If there was one word to describe optimal iteration velocity – that would be “stable”. A sudden drop or increase of velocity might indicate issues in planning. The velocity report in TeamPulse indicates stories and bugs completion over time. The vertical axis represents total sum of the estimates, while the horizontal one shows the iteration/s. 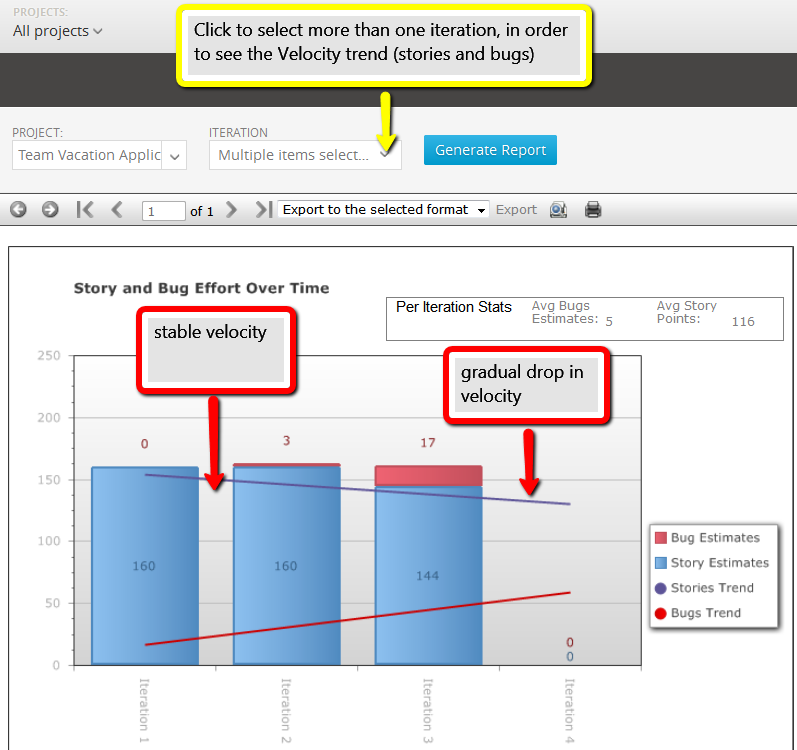 Cross-reference Forecast with the Real Delivery

(Go to Analyze > Reports > Requirements Report Types >> Estimate vs. Actual)
Completing all corresponding tasks is a key element to a successful story delivery. You can regulate task estimation as opposed to the actual work completed after utilizing this report. 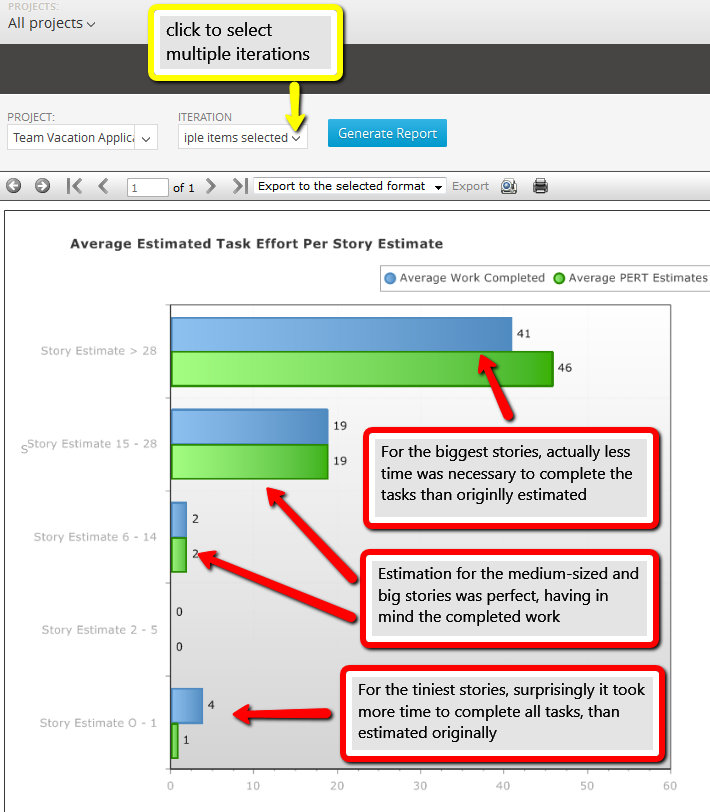 Note: Only completed stories and their completed tasks are included in the report.

The vertical axis represents the total estimate for the work items, while the horizontal one shows the respective iteration. 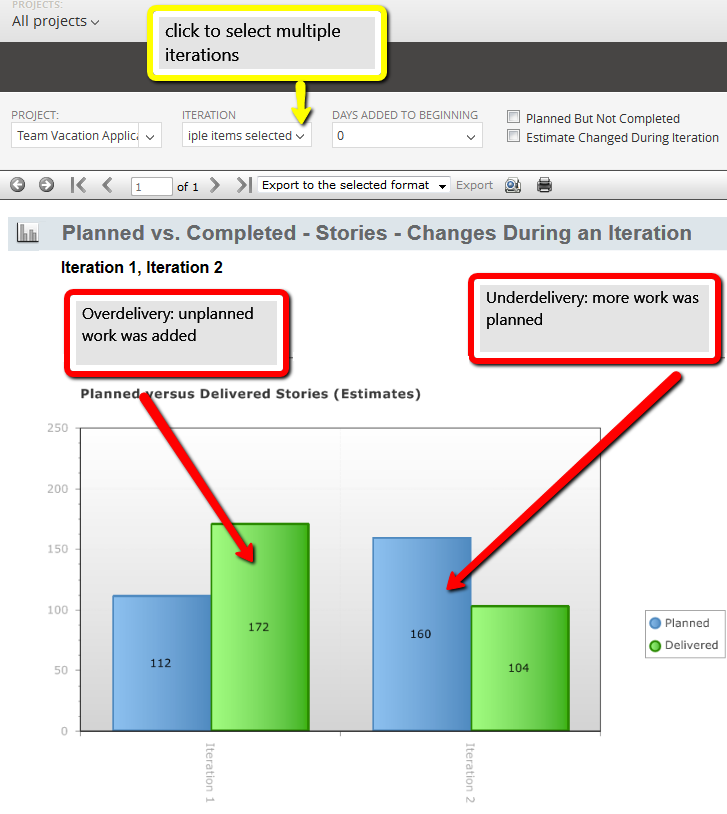