Resources
Data Access has been discontinued. Please refer to this page for more information.

This article is relevant to entity models that utilize the deprecated Visual Studio integration of Telerik Data Access. The current documentation of the Data Access framework is available here.

Each persistent type defined in the Telerik Data Access Domain Model has an identity that is made up of one ore more primitive members. Together these members uniquely identify an instance of the persistent type. In the Visual Designer and at runtime you see this represented as an ObjectKey. An ObjectKey instance describes the identity of a persistent type. The ObjectKey plays a critical role in the life cycle of an entity, enabling your application to keep track of an entity, perform database updates, and more. Normally, this in-memory identifier is mapped directly to a primary key column(s) in the database.

In case the ObjectKey is not defined, you could set it in the Visual Designer by using the Properties window. 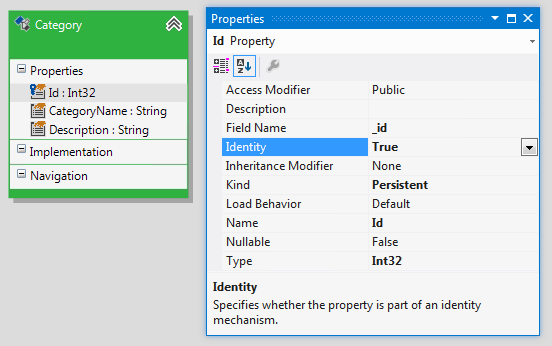 The OpenAccessContext reads the ObjectKey information to perform many of its functions. If your domain model contains an entity without specified key (identity), then you will receive an exception each time you try to perform create, insert, update, delete operations with the context. The exception message should be similar to: "Invalid object name 'voa_keygen'. Telerik.OpenAccess.RT.sql.SQLException: Invalid object name 'voa_keygen'." In this case you should find all entities without keys in your domain model, and set any non-nullable primitive property as an Identity.

There are several requirements about the object key:

An ObjectKey instance contains the persistent type name, and the entity's identity information, which could be from a single property, or could be a composite key that depends on a number of the entity's properties. The figure below shows an ObjectKey for the SingleIdentity object. It says the type name of this entity, and that its key property is composed of only one property, Id, whose value is 1.

An ObjectKey provides an array of key-value pairs - one for each identity member of the persistent type. The Key is the property name of the identity and the Value is its value. Each key-value pair is wrapped into an ObjectKeyMember instance.

For the ConcurrencyMode.Changed mode, the version information consists of all fields of the type that participate in concurrency checks since the values of all fields constitute a specific version of the instance. If a persistent type has its ConcurrencyMode property set to None, i.e. no concurrency checks will be performed during an update, then the ObjectKey for an instance of this type will have no version information.

You should not specify the version information for an ObjectKey explicitly in the code. You should use the ObjectKey.CreateWithVersion static method or the OpenAccessContext.CreateObjectKeyWithVersion method to obtain an ObjectKey with version.